“Cooking simple, cheap and tasty food!” is also the idea behind and the title of the second cookbook published on 30 September 2010 for the benefit of Hamburger Tafel.

Whether it’s typical Hamburg cuisine, wholefood or tips for the next children’s party — the new book also contains recipes for small delicacies and large meals which are not difficult to prepare and can be realised on a low budget.

Contributions from Hamburg’s celebrity cooks, Cornelia Poletto, Rainer Sass, Ali Güngörmüs and Andreas Steinwandt, who are supporting the idea behind the cookbook, will inspire you to copy their dishes — and NDR presenter Alexander Bommes reveals his favourite recipe to readers.

The recipe collection is published by Großmarkt Hamburg Verwaltungsgenossenschaft (GHVG) — an association of traders who have been supporting Hamburger Tafel and sponsoring the Tafel’s cookery courses for young mothers with fresh ingredients for many years. Incidentally, it was the cookery courses that gave rise to the idea of the cookbook.

After the success of the first edition in 2008, it quickly became clear that there had to be a sequel. The anticipatory pleasure is all the greater.

The proceeds of the book will go towards organising further cookery courses by the Tafel for young families managing on a low budget.

You can also buy the cookbook through the wholesale market. Please send your order to » info@grossmarkt.hamburg.de 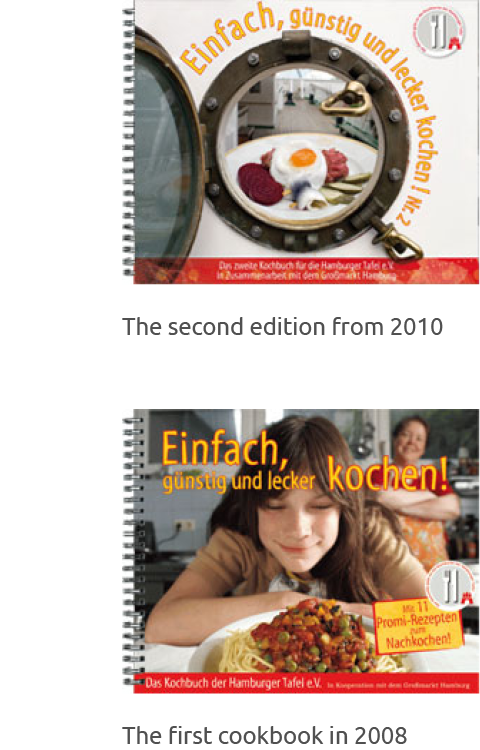